As if motorists have not got enough to concern themselves with due to fuel prices increasing, car insurance premiums going up for many last year and another increase in the Insurance Premium Tax (IPT) due this year that will result in another rise in such premiums. Well, unfortunately, it is being forecast that the average cost of motor insurance is going to go up for another reason for a considerable number of drivers – a change in what is known as the Ogden Discount Rate. 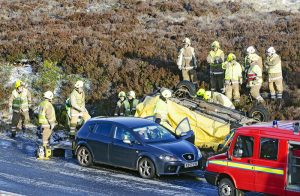 Car insurance companies may have to pay out more in compensation for long-term serious injuries sustained in a road traffic accident due to a change in the Ogden Discount Rate.

This is the rate that is used to help calculate compensation payouts to people who have had a serious long-term injury perhaps caused in a road traffic accident. The Association of British Insurers (ABI) has been critical of the decision that was made by the Ministry of Justice.

The rate is to be reduced from 2.5% to -0.75% in March 2017. As a result, insurance companies will need to set aside more monies for compensation payouts and it will not come as a surprise to read that insurers are presumably not going to be happy at the announcement as there profits could be reduced.

Hopefully, more existing motorists than presently do will check with a number of insurance companies to see if they can get cheaper cover than they are presently paying with their current provider upon receiving their renewal notices. Also. Those seeking motor insurance for the first time may also wish to do the same sort of research.

There are dozens of providers of car insurance who are competing for such business and it should not take too long to get a number of quotes especially if you were to do so by using one or more of the price comparison websites on the Internet. It is often possible to speak to such businesses on the phone if that is your preference. However, do make sure that you are comparing like for like cover when obtaining quotes.