Potentially, if there were fewer accidents on our roads, this could lead to either a reduction in the cost of providing car insurance or help maintain premiums at existing levels that in the last 12 months have shown an upward trend. This is because, if there are fewer accidents then not as many people will claim on their policies resulting in the car insurance providers not having to pay out as much in claims. 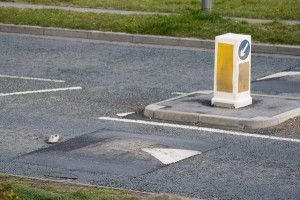 Speed bumps could help reduce the number of fatal accidents.

It is interesting to read that some research carried out for Churchill Car Insurance has revealed that there was a significant increase in spending on measures to reduce the speed at which vehicles travel on certain sections of roads in the UK in 2014. In the region of £75.6 million was invested in such measures in 2014 whereas in 2013 it is estimated that around £49.6 million was spent.

It is also pleasing to hear that there are now around 5,900 sections of road that have a 20 mph speed limit. This is because the likelihood of someone being fatally injured when hit by a car driven at 20 mph is 1.5% yet if you were hit by a car that was travelling at 30 mph then this goes up considerably to 8%. Presumably, a fair few of those 20 mph speed limits are outside the likes of schools to offer some protection for youngsters who are perhaps more likely to mistakenly step out into the road in front of an oncoming vehicle.

Apparently, the research also revealed that as many as 42% of people in the UK do not think that vehicles slow down as a result of traffic calming measures. This does seem a very high figure.

It was also found that 47% of people felt that such measures actually result in vehicles getting damaged in some way. Could it be that some of those people do not actually slow down when say going over a “speed bump” in the road and that is how their cars are damaged?

Anyway, these traffic calming measures would appear to potentially save some lives, reduce the number of serious accidents and could have a positive impact on car insurance premiums.